As our bodies develop, so do our brains. We adapt, we learn, we make memories, and become smarter. However, just as your body eventually changes over time, the brain goes through changes as well. The brain’s aging process begins in your late twenties, which results in neurons being lost. By the time you reach your sixties, the brain begins to shrink – and while this might sound startling, it’s a natural process that happens to everyone. 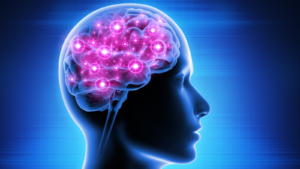 When we are born, we’re born with the following: Billions of neurons, reflexes, and basic survival skills. As we grow up, those neurons get bigger and work harder, and also aide in everything from our eyesight to our hearing. By the time you reach 2 years of age, your brain will already have reached nearly 80% of its adult size. During early childhood, the brain is about 85% developed. You’ll have learned intellect, motor and social skills, and will have adopted you own personality. The brain’s use for language is also strengthened during this period. By adolescence, brain activity increases in the frontal lobe. The frontal lobe is the part of the brain that is responsible for controlling cognitive skills such as problem solving, emotional expressions, our ability to judge, as well as memory. It’s essentially what allows us to communicate. Once you reach your early twenties, the frontal lobe finishes developing and the brain has reached its peak performance. In your late twenties to early thirties, the brain begins to go through even more changes. For example, the myelin begins to degrade, which means the receptors in your brain don’t fire off as quickly, and you start to lose speed of thought and reasoning skills. It may also take longer for you to memorize things, such as words or names of people.

Once you reach your sixties (or older), the brain will have significantly shrunk in size. While it sounds scary, this happens to everyone as a result of aging. However, one of the biggest risks associated with aging and the brain is Alzheimer’s disease. There are certain risk factors that can contribute to the likelihood of being diagnosed with Alzheimer’s, such as smoking, high blood pressure, diabetes, high cholesterol, obesity, lack of physical activity, alcohol use and depression. These are known as modifiable risk factors, meaning you have the ability to change them and decrease your chances of developing Alzheimer’s.

To improve and maintain your brain health, it’s important to live a healthy lifestyle. Quitting smoking, avoiding alcohol, and eating healthy foods are the three most important factors when it comes to having a healthy brain. In addition, you should also try to challenge your brain as much as possible; for example, by trying something new like learning another language or reading a book you haven’t read before. It’s also important to reduce your stress level, which can be done through things like physical activity and meditation.

You also need to take steps to protect your brain – especially when playing sports. Concussions are one of the most common brain injuries that one can suffer from – particularly if you play contact sports (i.e., football.) If you or someone you know plays contact sports, it’s recommended that a helmet be worn at all time. Concussions can also happen as a result of a blow to the head, or from a fall (and subsequently banging your head on something.) For more information on brain injury prevention, click here.