Losing weight is something that many people struggle with. In order to know why weight loss can be difficult, it’s also important to know the way in which things have changed over the years – particularly with our food habits.

In the 1970s, for example, meals were often prepared and cooked at home, while supermarkets sold foods that were mostly whole and natural, and very little foods that were processed. People were also a lot more active, had more jobs that were labor-intensive, didn’t eat or drink as much socially, and consumed smaller portion sizes – in comparison to now, where many people will buy their foods outside of home (such as at fast food restaurants), and as many as 80% of the foods sold in supermarkets are highly professed with things like added sugar, salt and other chemicals that are considered unhealthy. People also live more sedentary lifestyles, with more desk jobs existing, as well as more social eating and drinking, and consumption of larger portion sizes. 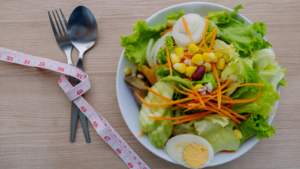 When you hear the word “calories” your mind most likely automatically thinks of gaining weight. However, it’s important to note that not all calories are bad or equal. In fact, the body needs a certain number of calories in order to thrive and properly function. A small apple, for example, can contain approximately 50 calories – but also contains fibre, which digests slowly, causes your energy to release slower, doesn’t spike blood sugar, contains vitamins A, B1, B2, B6 and folic acid, as well as has other antioxidant benefits and contains water. On the other hand, a can of soda gets you calories but not in a healthy way. It also contains no fibre, so your body will digest it immediately, it absorbs straight to the liver (which stores straight to fat), doesn’t contain any vitamins or minerals, and contains large amounts of sugar and other unhealthy ingredients.

Unhealthy eating will cause you to gain large amounts of fat, resulting in you becoming overweight or obese, and can cause other problems with your health such as high blood pressure, high cholesterol, and more. When you make healthier food choices, you’re not only giving your body the right kind of fuel that it needs, but you’re also boosting energy levels in the process as well as reducing your risk of disease and will find it easier to control and maintain your weight.

It’s also important to know the difference between being overweight and obese. When you are overweight, it means you’re having too much of something – such as too much processed food, too much alcohol, and too many calories in addition to little or no exercise, while being obese means you are eating things in excess. Whether you are overweight or obese, you are at an increased risk of things like cardiovascular disease, hypertension, stroke and diabetes. You can make changes to your lifestyle, however by reducing and outright eliminating processed foods from your diet and being aware of portion control, making sure you’re eating three healthy well-balanced meals per day, and getting regular exercise starting at least 2 to 4 times per week and slowly increasing your amount of daily activity.

When it comes to portion control, remember, it’s not about counting calories. Instead, it’s about making sure you’re eating the right amount of foods during your meals. For example, you need at least 1 portion of protein (such as chicken), 1 portion of a starch carbohydrate (such as wholegrain rice or quinoa), 2 to 3 portions of fruits and/or vegetables (such as apples, berries and broccoli), and healthy fats (such as omega 3’s and 6’s which are found in fish, nuts and seeds, as well as water with every meal.