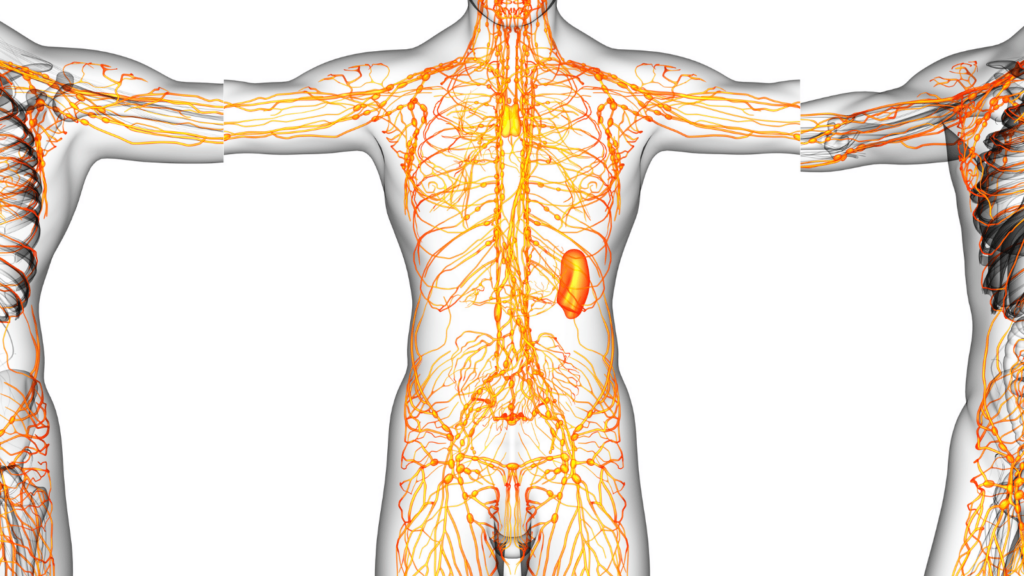 The lymphatic system is one of the most important systems within the body, playing a central role to your overall health. However, it is also one of the most overlooked systems. It’s complex, but it’s also intuitive in warding off infections, and much more. Within the lymphatic system are lymphatic vessels containing fluid-filled immune cells, in addition to as many as 600 pea-sized, bean-shaped glands known as lymph nodes. Together, these help to fight disease. While on the move, the immune cells scan for any potential threats to your body – such as a virus or bacterium. If a threat is detected, these cells trigger an increase in the number of disease-fighting cells in effort to thwart off whatever the threat may be (such as an infection.) The lymphatic system also works to remove other impurities and waste products from the body, and it also protects you from toxins.

As for where your lymph nodes are located, they are throughout the body in clusters, but they tend to be most prominent in the neck, armpits, and groin. For example, when you develop a common cold, you may notice a tiny, firm lump appear just underneath the side of your neck. This typically isn’t anything to be alarmed about and is usually a sign that your immune system is doing what it needs to do in effort to clear the infection from your body and will usually go away after a week or two. In some instances, having enlarged lymph nodes may be indicative of a more serious health problem, or could even be due to a reaction to a medication. If the enlarged node happens to get bigger and lasts for more than 2 weeks, it’s recommended that you get it checked out by your physician.

In order for your lymphatic system to work as it should, you need to keep it as healthy as possible, which means maintaining your overall health. Having an unhealthy lymphatic system has been associated with many different types of illness, including MS (multiple sclerosis), fibromyalgia, chronic fatigue syndrome, poor digestion, and other general aches and pains. It has also been linked to an increase in fat deposits, cellulite, as well as obesity.

So, what can you do to ensure your lymphatic system is a healthy as possible? By now, most of us are aware that the foods we eat play an integral role in our health and can be very beneficial in maintaining our weight in addition to reducing the risk of things like heart disease and diabetes – but having a healthy diet is equally as important for the lymphatic system, too. For example, things like preservatives, excess sugar and processed foods can all be quite straining on the lymphatic system without you even realizing it, so you’ll want to make sure the foods you’re eating are as natural and as organic as possible. Fruits and vegetables, in particular, are great for the lymphatic system as they provide it with essential vitamins and minerals, antioxidants, and phytonutrients. In addition, green vegetables also contain something known as chlorophyll, which is also beneficial to your lymphatic system; while foods containing essential fatty acids (such as flax seeds, pumpkin seeds, walnuts and almonds) are also great options. You should also make sure you’re drinking plenty of water each day, as the lymphatic system depends upon a constant supply of fluid in order for it to fully function. When you suffer from muscle strains or general aches and pains, a massage can not only help you feel better, but it can also stimulate the lymph nodes and promote fluid movement. Staying active is also key, as your lymphatic system relies on muscle movement to also promote the flow of fluid throughout the lymph vessels. Activity can include everything from walking to yoga, stretching, and even strength training.