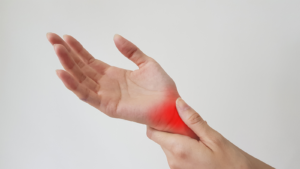 A Repetitive Strain Injury (RSI), affecting over 2 million Canadians, is trauma to the nervous and musculoskeletal systems that is usually caused by tasks that are repetitive or forceful in nature, and by continuous or strenuous positions. RSI is an umbrella term that is used to describe various conditions such as tendinosis/tendinitis, edema, golfer’s elbow, and focal dystonia. One of the most common RSI’s affecting Canadians today is CTS, commonly known as Carpal Tunnel Syndrome.

When it comes to treating Carpal Tunnel Syndrome and other RSI’s, is always dependent on the symptoms presented by the patient. Common NSAID pain-relievers such as Advil and Aleve, which are available without a prescription, can be helpful, but they are not always conducive in the relief of symptoms. When NSAID’s or other pain-relief medication proves to be ineffective, your physician may turn to the use of corticosteroids. Corticosteroids are often given via injection into the site of pain, or they can also be taken orally in pill form. In addition to medicinal treatment, physical therapy is also beneficial for CTS sufferers. With various physical therapists available to see in Burnaby and surrounding areas, as well as throughout Canada, attending regular physical therapy treatments should be easy and will help to strengthen the muscles in the hand and wrist as well as improve the dexterity. As with any surgery, there are risks (such as nerve damage) – and while those risks are low, surgery is still not a popular choice of treatment for Canada healthcare professionals and their patients given the length of time it can take for one to recover and regain the full use of their hands (up to 3 months.)

To avoid Carpal Tunnel Syndrome and any long-term, irreversible nerve damage, it is recommended that you avoid any type of activity that may worsen the symptoms or cause further strain. For example, if you are going to be typing on your computer or writing for a prolonged period of time, it is important that you take 10 to 20 minute breaks in order to relax the muscles.