The sinuses make up the upper part of our respiratory tract – from the nose all the way down to the throat. They consist of the frontal sinuses, which are located in your forehead, the maxillary sinuses, which are located inside of your cheekbones, and both the ethmoid and sphenoid sinuses, located just behind the nose. Aside from being responsible for helping us breathe and inhale oxygen, the sinuses are also responsible for our ability to smell and taste, as well as immune system defence. The sinuses also help to keep our noses protected from dust, dirt, micro-organisms and other pollutants. 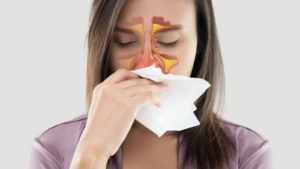 The sinuses, however, can be a very complex part of the body and there are many health concerns that can arise as a direct result of the sinuses. Some of these problems include having a poor sense of smell, nasal congestion or nasal obstruction, difficulty breathing, allergies, nasal polyps and sinus infections.

Generally, nasal mucus is usually clear. However, when the sinuses become infected, this mucus can change to green or yellow in colour, which is usually indicative that the body is fighting a viral or bacterial infection. Sinus infections can occur on their own or as a complication of the common cold or flu. They are also a top cause for temporary loss of smell and taste. Aside from a change in mucus colour, symptoms of sinus infections also include nasal congestion, facial pain and/or pressure, headache, and even tooth pain.

In order to determine whether or not a sinus infection is present, a physician will usually refer patients for a medical imaging test known as an X-ray. This will take a clear picture of your sinuses and the radiologist responsible for writing the report will then let your physician known if an infection is found. If it is determined that you do, indeed, have a sinus infection, Dr. Ali Ghahary will prescribe the patient with antibiotics. One of the most common antibiotics used to treat sinus infections is Amoxicillin; it is usually a first-choice for physicians due to its high success rate as well as the fact that it has fewer side effects reported in comparison to other antibiotics. For patients who are allergic or sensitive to Amoxicillin, or if it does not clear your sinus infection, other antibiotics that can be used include Clarithromycin (also known as Biaxin) and Clindamycin. It is important to treat sinus infections early to avoid any complications.

If you have persisting sinus infections or sinus problems, talk to your doctor about the possibility of being referred to an otolaryngologist – also known as an Ear, Nose and Throat (ENT) specialist.