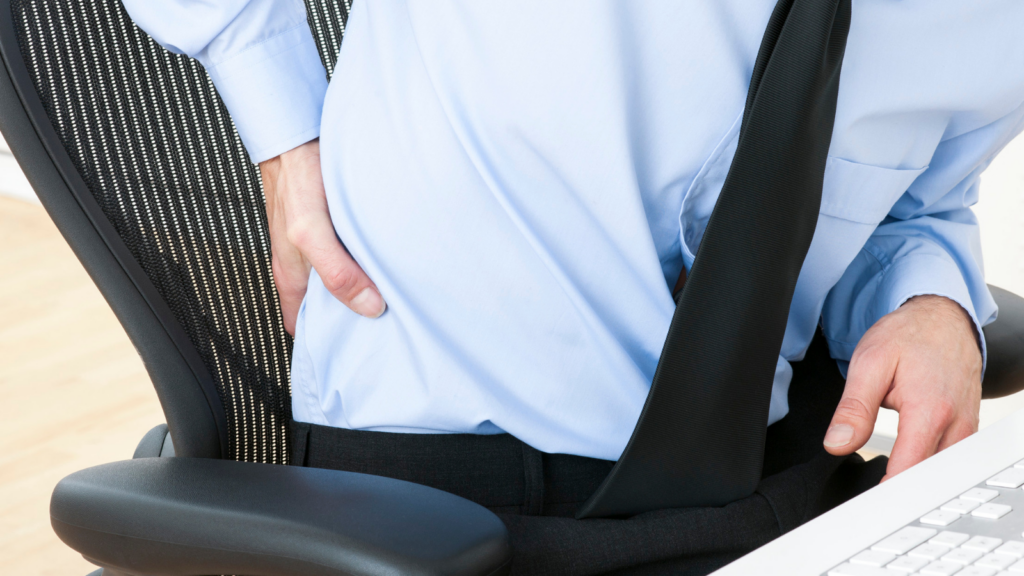 Whether you’re at work, at school, or live a sedentary lifestyle, research has shown that sitting for extended amounts of time has been linked to a number of health concerns, including obesity, high blood pressure, high cholesterol, and high blood sugar levels. According to a series of studies, those who sat for longer than 8 hours per day without any kind of physical activity were at as high a risk of dying compared to those who died from obesity and smoking-related illness (such as lung cancer.) Data from that same study, however, also showed that getting as little as 60 minutes of moderate exercise per day actually countered the effects of prolonged sitting and improved health. In addition to some of the aforementioned health concerns, which can be quite serious, too much sitting can also have an impact on your back and posture.

If you’re someone who does happen to sit for long periods of time, it’s recommended that you get up and move around as much as possible. If you are able, you should take a break from sitting at least every 30 to 60 minutes. Some offices may also be able to accommodate their staff by allowing use of standing desks. If you have a business meeting to attend, suggest to your co-workers that it be held while going for a walk instead of sitting in a conference room. If you have an at-home gym, position things like bikes and treadmills in front of your television…this way you can still watch your favourite shows and be in motion at the same time. Physical activity can work wonders; it can not only help with preventing back pain, but also build strength, help maintain muscle tone and improve your overall mobility.

As mentioned, sitting can also have an impact on your back, so if you suffer from back pain after a long day at work or school then your chair is likely the reason why. This is because sitting puts quite a bit of pressure on your spine as opposed to standing. When we sit, the disks in our back, which are meant to expand and contract as we move, actually become compressed. Over time, these disks will eventually lose their flexibility, which can also then increase the risk of developing herniated disks. The back isn’t the only part of your body that can be affected, either. Your neck and shoulders can, too. Because it’s not uncommon to hold your neck and/or head forward while sitting doing computer work, this can lead to the cervical vertebrae becoming strained, thus causing the neck and shoulders to become sore. Sometimes this pain can even become permanent. Muscle degeneration can also occur due to prolonged sitting, and you may notice this in the hips especially. Prolonged sitting can cause the hips to become tight, as well as reduce your range of motion in the hips. Decreased hip mobility is also the leading cause of falls in individuals who are elderly, leading to hospitalization.

As if all of that wasn’t bad enough, sitting also equals poor leg circulation. This can cause swelling, which is typically reduced by keeping your legs and feet elevated and by applying ice to the swollen areas. However, prolonged sitting can also lead to a condition known as DVT (Deep Vein Thrombosis.) DVT is the development of blood clots in the legs; and, if left untreated, can be deadly.

For more tips on how to reduce back pain when sitting, click here.