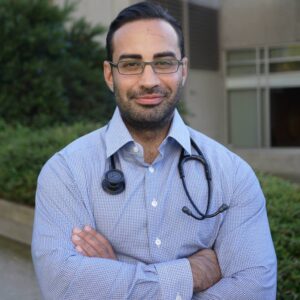 A graduate of Edmonton’s Old Scona Academic High School in 1996, Dr. Ali Ghahary went on to advance his education at the University of Alberta from 1999 to 2003 where he obtained his B.Sc. in Medicine and also received his M.D. with Honors in Research (experience includes clinical and laboratory Pulmonary Research Groups, Surgical Medical Research Institute, and Plastic Surgery Research lab.) In 2005, he completed his Family Medicine residency at McGill University in Montreal, Quebec with both CCFP (Certificant of the College of Family Physicians) and LMCC (Licentiate of the Medical Council of Canada) licensure. Along with his medical degrees, Dr. Ghahary also holds several undergraduate achievements to his name, including Edmonton Public School Board Honors and First-Class Honors, an award for Medical Research from the Alberta Heritage Foundation, as well as being the winner of University of Alberta’s Faculty of Medicine Student Research Day. He also received a Faculty of Science undergraduate scholarship, in addition to a Louis McKinny post-secondary scholarship.

Dr. Ghahary first began his career as a physician in 2005 with over 11 months of locum work at Prince Albert Minor Emergency Clinic located in Prince Albert, Saskatchewan, followed by further locums in rural areas of northern Saskatchewan for Northern Medical Service from 2005 through 2008. Dr. Ghahary eventually settled in British Columbia, holding full privileges at Lions Gate Hospital as well as associate privileges at Chilliwack General Hospital. From September 2008 to November 2009, he worked at a full-service Family Medicine practice in Chilliwack, taking over patient load for two retiring GP’s which consisted of an almost exclusively geriatric population of those requiring both complex care and chronic disease management, and in various settings, including in-office, at patients’ homes, in nursing and retirement homes, as well as in hospitals. In 2010, Dr. Ghahary practiced at Port Moody’s Newport Medical Clinic as well as Louis Brier Home & Hospital where he cared for numerous long-term care residents.

It was his interest in science and human physiology, as well as a deep desire to help individuals in both fundamental and important ways, that lead Dr. Ghahary toward his strong devotion and dedication to the field of medicine. Through this website, it is his goal to continue those efforts by informing and educating the world about health and medicine, as well as provide practical tools for individuals so that they can improve their overall wellbeing.

Outside of the medical field, Dr. Ghahary is also interested in technology and gadgets, film and media (including scriptwriting and acting), fitness (such as weightlifting, skiing, biking, and kiteboarding), travel, food, and music.