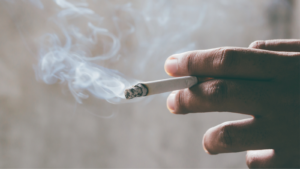 It’s no secret that tobacco is one of the most harmful things for your body. If you smoke cigarettes, you’re putting yourself at risk of a multitude of health problems – including everything from changes to the skin, discolouration of the teeth and/or tooth decay, as well as severe respiratory problems such as asthma, pneumonia, emphysema, and lung cancer. In fact, smoking is directly responsible for nearly 85% of lung cancer-related deaths, and as many as 80% of deaths due to COPD (Chronic Obstructive Pulmonary Disease.) The unfortunate thing about smoking is that once you start, it’s difficult to stop. This is because tobacco contains nicotine, which is addictive. The good news is that there are many different tips, tools and other options available for individuals looking to break this bad habit – all it takes is a little bit of will power and determination.

Smokers aren’t the only people affected by tobacco use, however. It can have just as equal of a negative impact on non-smokers as it would those who smoke regularly, or even those who only smoke socially. In other words, being exposed to cigarette smoke is harmful for everyone – but unfortunately, not everyone is aware of the dangers that second-hand smoke can pose.

The first and maybe most important thing that everyone needs to know is that there is absolutely NO risk-free level of exposure to second-hand smoke – and you shouldn’t let anything, or anyone, convince you otherwise. Being exposed to second-hand smoke can lead to many of the very same health consequences as it would in someone who is a smoker – such as the previously mentioned respiratory problems and infections (COPD, asthma, pneumonia, lung cancer), to an increase in middle ear infections, nasal irritation (including sneezing and congestion), coughing, heart disease. In fact, second-hand smoke is responsible for nearly 35,000 premature deaths that are related to heart disease. In addition to this, breathing in second-hand smoke can also have immediate adverse effects on the blood and blood vessels, which can ultimately increase your risk of having a heart attack. Even the briefest exposure to second-hand smoke can be enough to do damage. It has also been known to impact the reproductive health of women, as well as is linked to sudden infant death syndrome.

As for how someone is exposed to second-hand smoke, there are many ways. For example, you might live with a friend or family member who smokes. You can also be exposed to second-hand smoke while driving in your car, simply by having your window rolled down and passing by another vehicle in which the driver happens to be smoking. Or, you could be walking past someone on the street who happens to be smoking. You may also live in an apartment building or condominium in which some of your fellow tenants are smokers, which is amongst the most common complaints when it comes to multi-dwelling living arrangements. While not all buildings are smoke-free, many have implemented (or are trying to implement) smoke-free policies. This is, in part, due to the fact that according to a survey of renters in British Columbia, the majority would rather live in smoke-free buildings. Along with living in a smoke-free property being better for your health, it can also reduce the costs of things like cleaning and repairs (such as painting, carpet cleaning and other maintenance.) If you’re unsure as to whether or not your building is smoke-free, you should check with your building manager. You can find more information on smoke-free housing here (including resources for both landlords and tenants.)

When it comes to avoiding second-hand smoke, it can be difficult, but there are certain things that both smokers and non-smokers can do to be mindful of one another. For example, if you’re visiting someone in their home and you don’t want to be exposed to second-hand smoke, ask if they would be willing to smoke outdoors instead of indoors for the duration of your stay. If you are a smoker and want to “light up” in a public area, be mindful of the fact that there are others who may not want to be exposed to second-hand smoke. Depending on where you are, many places have designated smoking zones – but you should always first check your local laws to make sure you aren’t smoking in a prohibited area. For tobacco and vapour-free locations specific to British Columbia, click here.