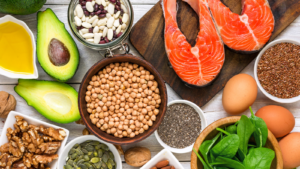 Inflammation can refer to a wide variety of conditions; everything from sinusitis, rheumatoid arthritis, and even emphysema. Inflammation is a non-specific response that occurs as a result of any type of bodily injury, whether it’s physical trauma, certain chronic diseases or illnesses, or any type of foreign body. Getting something as simple as a papercut can be enough to cause the body to have an inflammatory response. In this instance, you will notice things like pain, swelling and redness.

If your inflammation is acute, it generally resolves itself within 12 hours. However, in cases where inflammation is chronic (i.e., rheumatoid arthritis), it tends to last for a prolonged period of time. Chronic inflammation can be triggered by physical injury, certain allergens, toxins (i.e. certain air pollutants, household chemicals, pesticides and even medications), oxidation, oxygen deficiency in tissues, and even stress. Foods that can cause allergic reactions, such as nuts or dairy products, can also trigger an inflammatory response. When an inflammatory response is triggered, the body releases what’s known as “mediators” of inflammation, such as neurotransmitters and hormones.

You can fight inflammation through a variety of ways: By taking medications (such as NSAIDs), increasing your intake of certain nutrients (such as Vitamin C, Vitamin E, and flavonoids), by avoiding certain foods, as well as by eating certain foods.

Some of the best foods with anti-inflammatory effects include those that contain omega-3 fatty acids; i.e. fish (such as salmon, tuna, sardines and mackerel), nuts (such as walnuts and almonds), flax seeds, and canola oil. Onion, garlic and ginger are also great foods that can help fight inflammation and have been used for decades for this specific purpose. Other foods that are great for fighting inflammation (as well as provide a long list of other health benefits) include dark and leafy green vegetables (such as spinach and kale), berries (such as blueberries, strawberries and cherries), oranges, tomatoes, and olive oil.