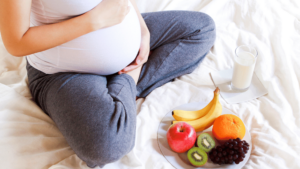 When you’re pregnant, you’re “eating for two” (yourself and your unborn baby); and while you should always be sure you’re eating a healthy, well balanced diet regardless of whether you are pregnant or not, pregnancy is a time where you should pay close attention to the things you’re eating and ensure you’re making the healthiest possible choices.

For example, when it comes to nutrition, pregnant women need more calcium, iron, and folic acid compared to women who aren’t pregnant.

Calcium is important during pregnancy as it helps to build your baby’s bones and teeth. Some great food sources of calcium include dairy products such as milk, yogurt and cheese, in addition to calcium-fortified juices, as well as leafy green vegetables such as kale and bok choy. It is recommended that you get anywhere from 1,000 to 1,300 mg of calcium per day during pregnancy. Pregnant women also need more iron – at least 26 mg per day – as it helps to create more blood to supply your baby with oxygen. Not getting enough iron during pregnancy can lead to a condition known as anemia, which can cause fatigue as well as increase your risk of developing infections. Good sources of iron include iron-fortified cereal, meat, poultry, fish, beans and peas. You can also improve your body’s ability to absorb iron by also including a source of vitamin C at the same time. Folic acid, also known as folate, is also something you will need more of if you’re pregnant as it helps to prevent different types of birth defects, including brain and spinal cord defects. You can get some folic acid from different food sources, such as leafy green vegetables, beans and citrus fruits, though it’s not as easy to get the suggested amount of folic acid from just diet alone in comparison to other nutrients, which is why it’s important that you take a daily vitamin (or prenatal vitamin) to ensure you’re getting the adequate amount.

Now that you know which foods and nutrients you need more of, it’s also important to be aware of which things you need to avoid or limit from your diet when you are pregnant. Coffee, for example, is generally considered safe during pregnancy – though you should limit your caffeine intake to less than 200 mg per day, which is the equivalent of one 12-ounce cup. Certain types of fish, such as albacore tuna, are known to contain high levels of mercury which can be harmful to your baby’s brain development and should be avoided, while it is safe to eat other types of fish, such as salmon, though this should also be limited to 8 to 12 ounces per week. When eating things like meat and poultry, make sure they are not raw or undercooked. If these foods are not cooked thoroughly, this increases your risk of passing on a toxoplasma infection to your baby which can lead to blindness or mental disabilities. Alcohol is also something that should be avoided, as alcohol in your blood can pass directly to your unborn baby through the umbilical cord and has been linked to fetal alcohol spectrum disorders which can result in physical, learning and behavioural problems in both babies and children.

Food cravings also commonly occur during pregnancy. When you develop a food craving, you may have a strong urge for certain foods, such as those that are sweet or salty, or even some downright bizarre combinations. Having cravings doesn’t necessarily mean you want a specific food – instead, it is usually the body’s way of giving off a sign that it wants more nutrients. On the flip side, you may also develop a strong dislike for certain foods that you once enjoyed when you weren’t pregnant.