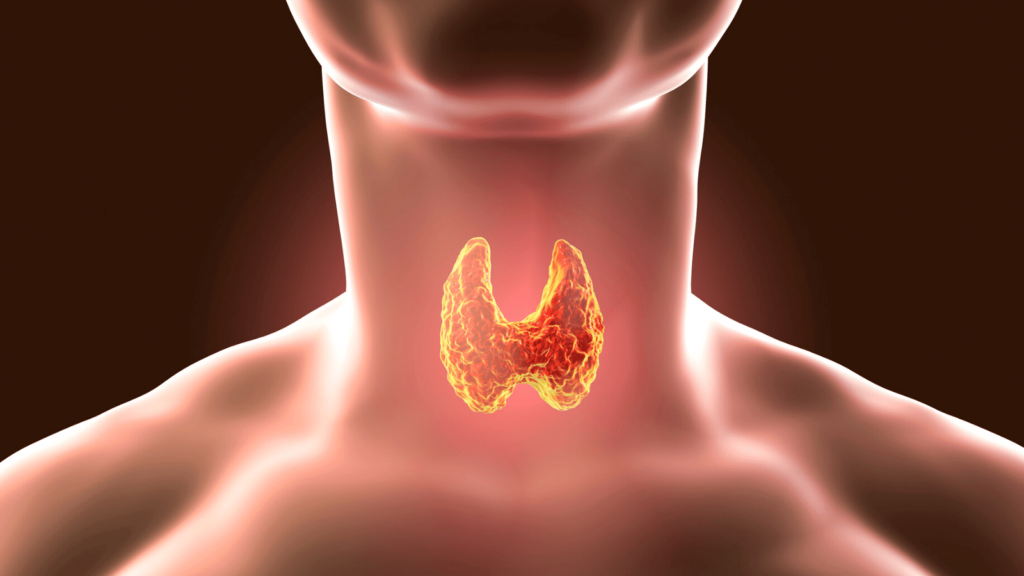 Thyroid disease is a common (and often hereditary) problem that affects as many as 1 in 10 Canadians. Of those 1 in 10, it is estimated that as many as 50% actually remain undiagnosed. The numbers are also just as staggering on a global scale, with an estimated 200 million people worldwide living with some form of thyroid disease.

The most common types of thyroid disease are hyper or hypothyroidism. When you are diagnosed with hyperthyroidism, this means that your thyroid is overactive and produces too much of its hormone. Causes of hyperthyroidism include Graves’ disease, and it can also be caused by a condition known as toxic nodular goiter or multinodular goiter, which causes the thyroid gland to overproduce hormones. Having too much hormone production can lead to a variety of symptoms, including nervousness or restlessness, racing heartbeat, increased sweating, shaking, irritability or anxiety, difficulty sleeping, thin skin, brittle hair and/or nails, muscle weakness, weight loss, and bulging of the eyes.

Hypothyroidism, on the other hand, is the complete opposite, and occurs when the thyroid gland is unable to produce enough of its hormones. Hypothyroidism can be caused from things such as Hashimoto’s disease, having surgery to remove the thyroid gland, as well as be caused from damage due to radiation treatment. Most cases of hypothyroidism are mild; however, it can still lead to symptoms such as dry skin, fatigue, sensitivity to cold, problems with memory, depression, weight gain, constipation, slowed heart rate, weakness, and in rare cases, even coma. These symptoms will worsen as long as the condition goes untreated.

As previously mentioned, both Graves’ disease and Hashimoto’s disease are also both linked to hyper and hypothyroidism. Also hereditary, Graves’ disease is an autoimmune disorder that occurs when your immune system attacks the thyroid gland by mistake, causing overproduction of the hormone that is responsible for regulating the body’s metabolism. You are also at risk of developing Graves’ disease if you are a smoker, are pregnant, or are under stress. Among the most common symptoms associated with Graves’ disease are bulging eyes and vision problems, heartbeat that is rapid or irregular, excessive sweating, tremors, fatigue, anxiety and irritability, trouble sleeping, frequent bowel movements or diarrhea, and irregular menstrual cycle. Similar to Graves’ disease, Hashimoto’s disease is also an autoimmune disorder that creates antibodies which attack the thyroid gland. It also causes large numbers of white blood cells (also known as lymphocytes) to build up in the thyroid. As there is no known cure for Hashimoto’s disease, it is usually treated with hormone-replacing medication to help raise the thyroid hormone level or lower your TSH levels and relieve symptoms of the disease, which can include ones similar to that of hypo and hyperthyroidism in addition to sensitivity having pale skin, face puffiness, enlarged tongue, unexplained weight gain, and general muscle and joint aches/pains, stiffness, as well as weakness. In cases where Hashimoto’s disease is advances, surgery may be required to remove all or part of the thyroid gland.

Thyroid cancer is also something that one can develop, but due to its lack of symptoms in its early stages, can be difficult to detect initially. Even when someone does become symptomatic (such as having trouble swallowing, voice hoarseness, or coughing), those symptoms are often easily mistaken for a mild illness, which ultimately causes a delay in getting a proper diagnosis. Other symptoms that could be indicative of thyroid cancer include the development of a lump in the neck (sometimes growing in size rather quickly), swelling of the neck, as well as neck pain which will often radiate up to the ears, and trouble breathing. If you develop any of these symptoms, it is important that you let your doctor know right away so that you can be evaluated and it can then be determined what course of treatment or testing needs to be done, if any.